skip to main | skip to sidebar

EUROPA: Safety of Offshore Oil and Gas Exploration and Production: Questions and Answers 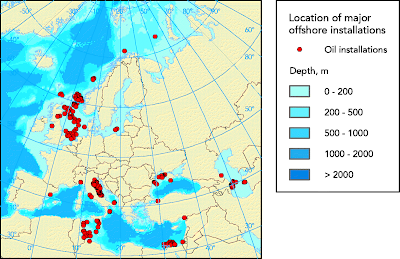 Why do we need EU safety legislation for oil platforms?
Offshore accidents do not know borders. If a similar explosion would happen as the one in the Gulf of Mexico, this would have serious effects in many Member States. It is in the interest of citizens that the highest safety standard already existing in given company or Member States will become the standard throughout the European Union.
Although, oil platforms fall already under a series of existing EU legislation, loopholes exist: if a rig accident occurs within the zone of maximal 12 nautical miles from coast, the oil company has to pay for the water damage and take remedial actions under the EU Environmental Liability Directive. Beyond 12 miles, no such EU rules exist.
What is new?
The European Commission for the very first time envisages comprehensive EU legislation on oil platforms covering the prevention, the response and the financial liability. This might take the form of a single piece of legislation.
• Granting permits: Although Member States will continue to grant licences for drillings, they will have to apply key EU criteria. Oil companies must have a contingency plan and prove that they have the financial means available to them to pay for environmental damage caused in the event of an accident.
• Controls: Oil platforms are controlled by national authorities. These supervision tasks of national authorities should be evaluated by independent experts. This is a completely new requirement.
• Standards for safety equipment: Technical standards will ensure that only control equipment meeting the highest safety standards will be allowed. At the moment, EU product safety legislation does not apply to mobile offshore drillings.
• Damages: Oil companies will have to remedy the damage caused to the protected marine species and natural habitat up to max 200 nautical miles from the coast. At present, the EU Environmental Liability Directive does not cover fish in terms of commercial commodities but protected fish and covers only the 12 nautical mile zone as the water quality as such. The European Maritime Safety Agency (EMSA), presently focussing on pollution caused by ships, will also help on those caused by oil platforms.
• International: The Commission will work for implementing existing international conventions and new common initiatives. At the moment, the protocol of the Barcelona Convention governing safety of oil rigs in the Mediterranean is not in force yet, as one signature is missing. If Italy will ratify as announced, the rules will enter into force.
Have you learnt from the Gulf of Mexico? Will new EU rules prevent what went wrong there?
In the case of the Deepwater Horizon rig, several failures coincided according to analyses available to date. It is already clear that the blow up preventer failed when pressure reached limits. Within the framework of technical standards of control equipment, we can set also quality standards for blow up preventers.
Likewise, in the case of the Deepwater Horizon, it took several months to design and drill a relief well to stop oil leaking into the sea water. In the contingency plans, which oil companies have to submit to national authorities, they should be required also to show that they can design these wells in a timely manner.
These are only examples. By the time EU rules are proposed in 2011, reports on the investigations of the Deepwater Horizon should be completed and will be fully utilized.
When will the Commission table the legislative proposals?
The Commission will present its legislative proposals early in 2011.
Are there any rigs in European waters being as deep as Deepwater Horizons?
Out of the 12 European Economic Area (EEA) countries having offshore operations, only Norway reports to have operating offshore activities in water depths of up to 1,300 meters. However, many countries want to follow Norway's example: In the UK, west of Shetlands, exploration is planned in a depths of up to 1,600 meters, near the Faroe Islands at a sea depth of 1,100 meters. Romania has awarded a licence for drilling in the Black sea, at a water depth of 1,000 meters.
In Libyan waters in the Mediterranean, wells were drilled at 1,500 meters and beyond, but drillings are also planned in water depth exceeding 2,000 meters. In Egypt, wells are planned in waters up to 2,700 meters.
Why does the depth matter?
As divers can only operate in a maximum depth of 200-250 meters, intervention in deeper waters in case of accidents become already difficult. In depths of 1000 meters, the pressure is such that even rescue work with remote control gets difficult.
Which EU countries have oil drillings?
Out of the nearly 900 offshore installations operating in the EU, 486 are in the UK, 181 in the Netherlands, 61 in Denmark, 2 in Germany, 2 in Ireland, 123 in Italy, 4 in Spain, 2 in Greece, 7 in Romania, 1 in Bulgaria and 3 in Poland. Cyprus and Malta plan to start drilling activities in the near future.
Publicado por canaan en 3:53

canaan
Director of an overseas programme titled: Sustainable Development. He was a visiting lecturer for the School of Public and Environmental Affairs of Indiana University (USA) within the course titled “Economic Evaluation of Health, Safety and Environmental Programs in Europe and the USA I and II” He was a visiting lecturer in the Institute for Public Administrations in Navarra (Spain); Ex university professor Retired public servant in environment department in Navarra Government (Spain). He has Scientific papers published in " Químic e Industría" , "Ingeniería Química" and other american scientific magazines; too opinion pieces in Spanish, French and American news papers.